India Kidney Hospital was started in April-2005. The Aim of the Hospital was to give the best quality of treatment for all types of Kidney Diseases.

What is Diabetic kidney? 5 Symptoms to look out for Diabetic Kidney 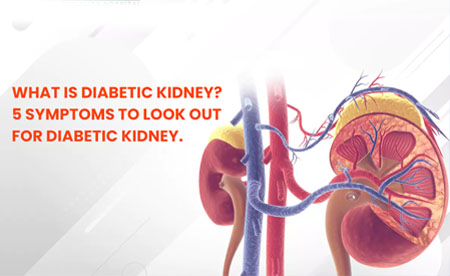 Diabetes causes diabetic kidney disease, which is a kind of kidney disease. Diabetes is the most common cause of renal disease. One in every three diabetic adults has kidney disease. The kidneys’ primary function is to filter wastes and excess water from your blood in order to produce urine. Your kidneys also assist control blood pressure and produce hormones that your body requires to function properly. When your kidneys are damaged, they are unable to filter blood as well as they should, allowing wastes to accumulate in your body. Kidney disease might also lead to other health issues. Diabetes normally causes kidney damage over a long period of time. You can protect your kidneys and avoid or postpone kidney disease.

What are other names for diabetic kidney disease?

Diabetic kidney disease, also known as diabetic nephropathy, is a kind of kidney disease induced by diabetes. It’s a highly common diabetic complication that affects roughly one-third of persons with type 1 diabetes and half of those with type 2 diabetes. The majority of the extra mortality linked with diabetes is due to kidney dysfunction. Because the kidneys eliminate metabolic waste, regulate blood pH, maintain fluid and electrolyte balance, and generate. Several hormones are lost, resulting in toxic waste accumulation, electrolyte imbalances, and a variety of other health concerns. The condition progresses gradually over time. When a person progresses from renal insufficiency to end-stage renal failure, the early loss of renal tissue often causes no symptoms. Symptoms often arise when a large amount of kidney function has already been gone. The ability to concentrate urine is frequently the first to deteriorate, resulting in numerous trips to the bathroom, particularly at night. Other early indicators include exhaustion, lack of appetite, and decreased mental function. Chronically high blood glucose levels in conjunction with high blood pressure. Diabetes is to blame. Make small blood suffer. Vessels in the kidneys altering their functionality, cellular deterioration in the kidney’s functional components The parasites of renal glomeruli, particularly nephrons, contribute to the deterioration of renal functioning.